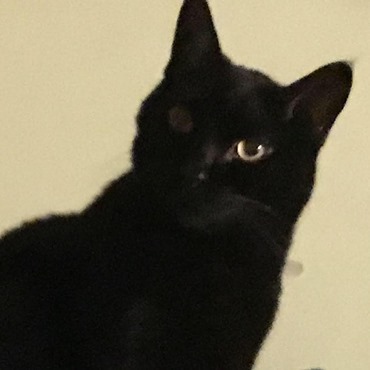 The Salvageable family lost a faithful companion this week.

Bo joined us eleven years ago when one of my coworkers needed to find a new home for her cat because of her daughter’s allergies. The cat was about five years old at the time. They had obtained him from an animal shelter which had already named him Bo; my family wasn’t excited about the name, but the cat was already used to it. To give him a little more dignity, we often spelled it Beau.

When he joined the family, he wasn’t interested in curling up on a lap. He preferred to be pet while standing on or near a lap. As he grew older, he became more of a lap cat. I found that he liked to be cuddled, held upside down like a human baby while I stroked his head and face. It seemed to me that he was reliving kittenhood, remembering being washed by his mother, so sometimes while cuddling him I would say to him, in my best James Earl Jones voice, “Bo, I am your mother.”

Bo also enjoyed supervising food preparation in the kitchen. He had a favorite stool from which he could supervise the chopping of vegetables and other states in putting together a meal. He loved the smell of cooking meat. He also associated the sound of the can opener with juice drained from canned tuna, which he was allowed to drink from a bowl. Even if he was napping, the noise of the can opener would rouse him and call him to the kitchen. The cook would usually let Bo smell the lid of the can if its contents were not tuna, just to let him know he was not missing anything good.

Bo sometimes would get excited and energetic and would tear around the house. He especially loved high places—the tops of bookshelves, the piano, the china cabinet, and the grandfather clock. He would even curl up and sleep in some of those places.

He liked being part of a large family. Some of his favorite moments involved sitting in the living room while several people carried on a conversation. When only one or two people were in the house, he would sometimes wander from room to room, crying plaintively. He came to like the sound of his own voice; he identified the areas in the house with the best echoes and lectured loudly in those places.

October 2012 brought the Mayan apocalypse to the Salvageable family. Cars were breaking down right and left, the computer crashed, followed shortly by the printer, a favorite co-worker left for a different job, and Bo added to the turmoil early in November. When my daughters were leaving early in the morning for a dance competition, Bo managed to slip outside. I didn’t miss him until suppertime, when I tore apart the house looking for him and also searched outside. When the rest of the family returned that night, the search was repeated, but with no success. We went to bed tearfully. The next morning he was found under the backyard deck of a neighbor’s house. He seemed no worse for the experience, and we were glad and relieved to have him back.

Bo had chronic respiratory problems, probably allergies. We sometimes wondered if he was allergic to himself. While he was capable of a genuine purr, more often he showed his contentment through heavy breathing. In November 2017 Bo had a sudden loss of balance which likely was due to a stroke. He was unable to walk for a couple of days, then gradually regained his equilibrium, but he was never the same after that. He would often tilt his head when looking at people, which I suspect was compensation for double vision. The last eighteen months have been, for the family, a bonus time with Bo, because we realize that we could have lost him when he had that stroke.

This spring his health began to deteriorate. His breathing troubles increased, and he began to lose weight. The veterinarian gave him antibiotics and steroid shots, and we spent money on high-calorie cat foods, as well as supplementing his diet with meat from our table. He still ate, but his body apparently lost the ability to nourish itself from food. Day by day his strength diminished. We did our best to make him comfortable. Like an old soldier, Bo faded away, until he breathed his last Thursday morning.

The Bible is unclear about whether we will be reunited with our pets. There will be animals in the new creation: “The wolf will lie down with the lamb, and the lion will eat straw like the ox.” The only mention of the soul of animals is found in Ecclesiastes, where Solomon says, “Who knows?” Previous generations of Christian teachers insisted that animals had no souls, and therefore had no afterlife. More recent teachers have said, “You will be happy in heaven; so if you need your pets to be happy, they will be there.” I am inclined to believe that animals who have had a close relationship with believers have gained enough soul from that relationship to be reunited in the new creation. We will find out when we get there. Maybe not, but possibly, Bo is waiting for that reunion as he used to wait for his people to come home. J.